The work to begin our mining season starts pretty early. It's much easier to bring equipment into the mine while the creeks & mud holes are frozen over with a snow machine than it is to try and drag stuff in during the summer months. We had lots of gear and equipment we wanted to get in for the 2009 season. It takes an average of about 3 hours to cover the 12 miles on 4 wheelers in the summer time. We can get through the same trail in under 45 minutes on a snow machine. 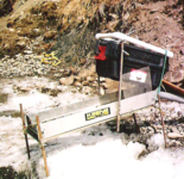 Home made high banker
one thing I wanted to get in was our 6 inch dredge. I built a hitch for it and pulled it in using the

dredge frame as its own sled. It worked out pretty well. We had the whole dredge at our cabin in only 2 trips. We also had a high banker I put together over the winter using our 2 inch dredge sluice box, and a small action packer I modified into a hopper from walmart. We were pretty exited to see how this would work.

As it turns out, The high banker worked great. We used part of an old refrigerator shelf as a grizzly screen that fit at an angle inside the action packer. I cut out the bottom of it so the material that would fall through the shelf grates would wash into the sluice box underneath. I put together some PVC for a spray bar, drilled holes in it and used the 2 inch dredge water pump.

Gary used it all season long. He also bought a 2 inch power nozzle for cleaning off the bedrock near the edge of the river. He could disconnect the hose from the spray bar and plug it into the power nozzle using it as a dredge.

We were able to use the unit to sample quite a few areas using it. For dry bedrock we built a gas powered vacuum, kind of like a shop vac. It uses a leaf blower for the motor. I found the designs online doing a Google search. The nice thing about the power nozzle was that it gave a much needed break from feeding the hopper with a shovel.

The water temperature was really warm in July. The only bummer was the river remained murky all summer long, and didn't clear up until late September. There were several heavy downpours that caused a lot of mudslides upriver from us. Due to the murky conditions I was not able to see to clean off the bedrock very good underwater.

We took the heavy dirt from our sluice boxes that collected in their carpets and fed it through a mini sluice box. This is a green plastic box with riffles in the bottom of it called a Le trap. I had heard about these cleanup sluices being very fast and effective in recovering fine gold from heavy black sand concentrates but had not used one till this past year. We would generate about 150 pounds of heavy concentrates every 3 to 4 days of working, and this was simply too much dirt to pack all the way back home. I must say I am now completely sold on how reliable this mini sluice turned out to be for gold recovery. We were able to work about 150 lbs of dirt down to about 10 pounds of super concentrated black sand with out losing any visible gold!

Everyone including the dog was happy!

Good Gold all around made for happy faces and joyful sounds!

We take the black sands & gold concentrates back to Anchorage and use our gold wheel to recover the rest of the flour gold. The photo below is the gold dust we recovered using the wheel. 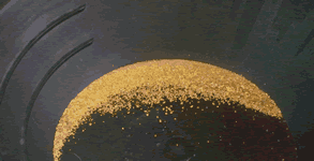 Gold Dust from the Wheel
Back to mining adventures