From Our Gold mine on Caribou Creek...
to the show room floor 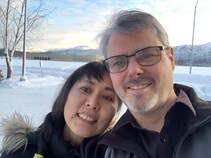 Steve has had the fever for mining since he was 5 years old when his father introduced him to the tale of the Lost Adams Diggings.  The idea of finding gold nuggets as big as fist sized eggs captured Steve’s sense of adventure and he was hooked.  His father later taught him to pan for gold outside of Ouray, Colorado at the stream where he found his first flake of gold.  Ouray was at the time, the location of their family's hard rock silver mine.  During his teenage years, Steve spent his weekends prospecting the dry desert washes in southwestern New Mexico.

Steve then went on to serve six years for the US Air Force and upon his return, he was introduced to a friend of his fathers who owned mining claims on the Salmon River in Northern California.  After spending a summer as an apprentice learning to dredge for gold, he was given an opportunity to buy an interest in the claims known as the Grant Creek Mining Co.

While mining and living in northern California, he was taken on as an apprentice by a local jeweler and he opened his first account in a small store called Somes Bar Store.  Using a discarded beer flat and a piece of black felt from Wal-Mart, Steve created his first jewelry display.  His first two gold nugget locket pendants sold within a week and the Northern Made Creations business was born!  Proceeds from those sales as well as the many sales that followed, were re-invested in jewelry making supplies and the business continued to grow to what it is today.

In the late 90’s gold prices and mining opportunities declined so Steve took a job in Shemya, Alaska.  Although there were no opportunities for mining in this area, he continued to design and create jewelry for local community members. Once the thrill of solitude and isolation wore off, he moved to Anchorage, Alaska and resumed mining, first at Tin Can Creek and currently at Caribou Creek.

In 1992, Roy drove up the Alcan Highway after graduating from Boise State University with a degree in Fine Arts and Education to teach in Hooper Bay, Alaska for five years, then Barrow (Utiqiagvik) for six and finally completed the remaining sixteen years teaching for the Matanuska Susitna Borough School District.  Although Roy was passionate about teaching, she also has had a passion for learning, designing and creating all her life.  Roy is currently enrolled at the Gemological Institute to become a GG (Graduate Gemologist).  When Steve and Roy met, they discovered that their interests and passions were aligned and together they continue to grow the business.  With Steve’s fever for gold and Roy’s interest in diamonds they are truly the premier, Alaskan Gold and Diamond Co.